Enjoy Date Night at Home with a Classic Movie and Wine 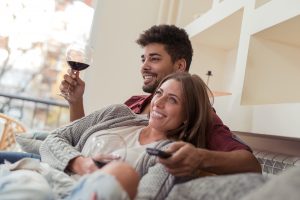 When going out to the movie theatre isn’t an option, enjoying a date night at home with a classic movie and a bottle of Two EE’s wine is a great alternative.

Snuggle up on your sofa with the movie and wine of your choice, and don’t forget the snacks! We have put together a few suggestions for you below.

Breakfast at Tiffany’s is a 1961 film starring Audrey Hepburn that takes place in New York City. Hepburn’s character seeks a rich man to marry but instead meets a charming writer. The movie won two Academy Awards and included Hepburn singing “Moon River,” which turned out to be one of the most memorable songs in the history of Hollywood.

We recommend enjoying this classic romantic comedy at home with a bottle of our Pink Diamond wine. This rose wine is a beautiful color and is reminiscent of glitz and dazzle. As we watch Breakfast at Tiffany’s, we picture Audrey Hepburn herself enjoying a glass.

One to Keep You on the Edge of your Seat

Jurassic Park is the well-known story of a remote island theme park that is home to dinosaurs created from prehistoric DNA. Promoted as a safe tourist attraction, things go awry when the various species of predators break free. This original movie released in 1993 was followed by four sequels spanning 25 years.

We recommend enjoying this classic thriller with a bottle of our Plum wine. Its bold, unique flavors combine to give a sweet start and tart finish. We think it’s perfect for the unique twists and turns found in Jurassic Park.

Sleepless in Seattle is a romantic comedy released in 1993. Featuring two of America’s favorite actors, Tom Hanks and Meg Ryan, it’s a sweet love-at-first-sight story that was initiated with the help of a lonely child. This isn’t the only time Hanks and Ryan have co-starred in a love story. They were also in Joe Versus the Volcano in 1990 and You’ve Got Mail in 1998 — two other great movie night options.

These romantic love stories make us think about our Catawba wine, which is a semi-sweet rose we describe as the best friend with whom you share your secrets.

An Evening of Justice and Friendship

Based on the book written by Stephen King, Shawshank Redemption is the story of an innocent man facing two life sentences in prison for the alleged murder of his wife and her lover. The main character is played by Tim Robbins, who befriends a veteran prisoner played by Morgan Freeman. This is the story of their journey, with a great twist at the end.

We enjoy our Marquette wine as we watch this 1994 drama. With grapes grown, harvested, and fermented right here in Indiana, this red wine is an homage to the hardworking and honest attitudes of our state.

Ocean’s Eleven is the story of a thief on parole played by George Clooney. He assembles a team of 10 accomplices, and they plan an elaborate scheme to simultaneously rob three casinos in Las Vegas. Brad Pitt, Matt Damon, and Julia Roberts also co-star in this 2001 heist film.

For this movie, we can’t help but recommend our Tannat wine, which is a dry red wine we describe as dark, big, and mysterious. The flavors that combine in this wine will keep you guessing, just like the Ocean’s Eleven crew during the movie.

We Hope To See You Soon!

We hope our suggestions have given you some ideas for a great movie and wine night at home.

If you don’t see your favorite movie listed here, we invite you to Two EE’s Winery. We would be happy to help you select a wine pairing for the movie of your choice.

See the latest information from Two EE’s Winery about COVID-19.

Viewers with disabilities can get assistance accessing this station’s FCC Public Inspection File by contacting the station with the information listed below. Questions or concerns relating to the accessibility of the FCC’s online public file system should be directed to the FCC at 888-225-5322, 888-835-5322 (TTY), or fccinfo@fcc.gov.